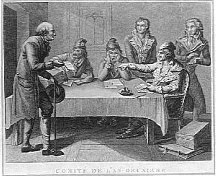 I'll talk to Hani about this - she has a keen interest in revolutionary history, so this might appeal to her...
Posted by Omer Golan-Joel at 4:29 AM